Posts Tagged With: The Lost Generation

All of you young people who served in the war.

You are a lost generation.” 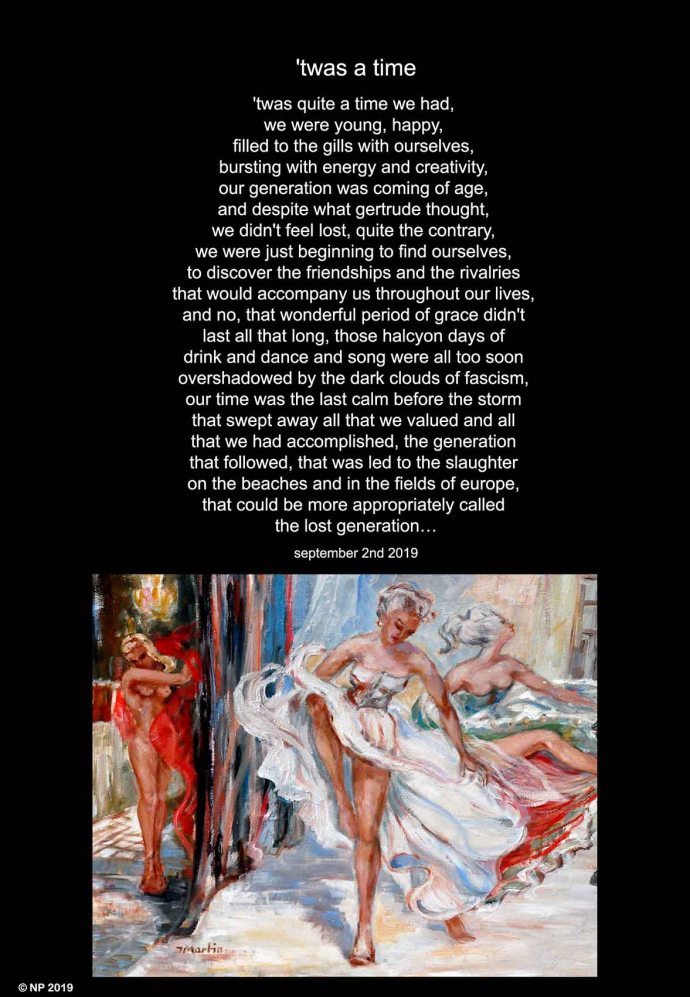 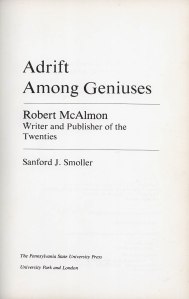 Like most people I enjoy a good mystery, especially when one turns up in the form of a book. But this time I’m not referring to a mystery novel or a story. This mystery is the book itself. Let me elaborate.

For the past few months I have been reading both works by and about the Lost Generation author and publisher Robert McAlmon, who unfortunately has remained relatively unknown and obscure and, since his death in 1956, certainly has not received the credit due him for his major contributions to legacy of 20th century Anglo-American-Irish literature. A few weeks ago I did a blog called “The Theater Of My Youth” in which I talked a bit about the expatriate scene in Paris in the 1920’s (https://nitepoetry.wordpress.com/2014/09/04/the-theatre-of-my-youth/) and around that time I ordered a biography about McAlmon from an American used book shop. I waited patiently for about three weeks while those paragons of bureaucratic efficiency at the customs office took their sweet time processing my almost 40-year-old used book. It probably sat on a shelf in their office for two of those weeks while they were busy taking endless coffee and cigarette breaks. The book, “Adrift Among Geniuses” by the McAlmon scholar Sanford J. Smoller and published in 1975, finally arrived in the mail the other day. It lacked the original dust jacket of course and was a bit bowed and bumped, but none the less I was happy to have acquired a copy and looked forward to reading it. There are a lot details about McAlmon’s hectic and always fast moving life that I don’t know anything about and this book would fill in some of those blanks.

Upon opening the book I noticed that written on the flyleaf in pencil was “1st edition,” and beneath that “ink on p. 204.” There’s nothing really unusual about that. It was, after all, a used book. I leafed through it stopping whenever I reached a photo. It looked like this would be an informative and interesting read. And then I got to page 204. On that page was a photograph of four people, two men and two women, standing next to each other on a beach and captioned, according to the list of illustrations at the beginning of the book, “Théoule 1929: Edward Lanham, Joan Boyle, McAlmon, Felicia Meyer.” Only the name Joan Boyle had first been erased and then scratched over with black ink. And that wasn’t all. The photo itself had been altered. Joan Boyle’s face had likewise been erased and inked over and curiously her stomach area had been erased too and was heavily covered with lines from a pen. And to add to the scenario, in the lower left hand corner of the page the words “My mother had the nerve!” were handwritten in two lines in blue ink. My curiosity immediately kicked in. Why would one individual deface a part of a photograph and then a second person write a criticism of the first person’s action? Watson, bring me my pipe and some tobacco.

I think that I could immediately rule out an act of a random owner’s censorship and commentary of that owner’s son or daughter. It just wouldn’t make any sense. Why deface an image of Joan Boyle and then erase her name?. Why not just deface the whole photo or even tear out the page? No, something else had happened here. Of course, the chances of me ever knowing what the reasons really were for this act of destruction are almost non existent. But let’s examine the scene of the crime. My first thoughts, and I must admit, they certainly weren’t very worthy of Mr. Holmes’ usual deductions, were that perhaps Joan’s sister, the author and political activist Kay Boyle, might have written the blue ink comment and that her mother might have done the ink job, my reason for thinking this being that I own a volume of McAlmon’s and Boyle’s “Being Geniuses Together” signed by Boyle in which there are several corrections that she made with a pen, one of them being next to a photo of her mother, Katherine, which is mistakenly captioned as Kay Boyle. She corrected it in pen saying that the photo was of her mother. If she commented like that in one book she might have commented on this disfigurement of her sister. But her mother had died some twenty years before the book was published and the handwriting was different anyway. I wasn’t going to get far with that first thought. That also rules out the idea that the blue ink comment was written by Joan Boyle. No, now there remained only one logical scenario. And it makes the most sense, given the content of the photo and the history of the people in it. Watson, I’ll have a small sniff of that cocaine along with my pipe if you please.

Edward (or Edwin) Lanham, the man on the left side of the photo (I can’t make out what he is holding, it looks like it might be two cats), and Joan Boyle were married from 1929 to 1935 or 1936 depending on which source you read. Through his Contact Press McAlmon published Lanham’s first novel, “Sailors Don’t Care” in 1929. This photo must have been taken shortly thereafter when they were all on holiday in Théoule on the Mediterranean. Suddenly the scenario became clear. Were the memories of those days too bitter? Did Joan Boyle try to “erase” the past by defacing her own face and figure? I can never prove it, but my guess is that at some point Joan Boyle owned this biography of Robert McAlmon. Like her sister she lived into her 90’s and died in 1993, so she certainly could have had this book in her hands in 1975 and erased and inked herself out. After all those years, and having long ago begun a new life, it just might be that Joan Boyle no longer wanted to be confronted with a memory of the wild times of her youth. And what about the comment in the blue ink? I can only assume that she must have had a child (for some reason I would think that a daughter would make a comment like that before a son would) who wrote the comment when she, perhaps after her mother’s passing, received the book and discovered her mother’s attempt at erasing the past. After an extensive web search I could only turn up information about when Joan Boyle died, that her married name was Detweiler and that at the time of her death she lived in Florida. I could find no information on any children. In the end though for Joan Boyle it was a useless exercise, for perhaps one can destroy a photograph, but no amount of ink or rubbing can truly erase the past. Like I say, I will never really know, but then, perhaps I have solved the mystery and, without knowing what I was buying, have added another interesting curio to my Paris signed edition collection.

Here is page 204 as I found it when first looking through the book with the erasures, the inking and the comment.

Here is a closer view of the photograph with the erased and inked areas highlighted.