WHATEVER GETS YOU THROUGH THE NIGHT

“We are always the same age inside.“

Digitally enhanced image created from an original photo of street art taken in Paris in September 2017.

“We live in a world where we have to hide to make love,

while violence is practiced in broad daylight.” 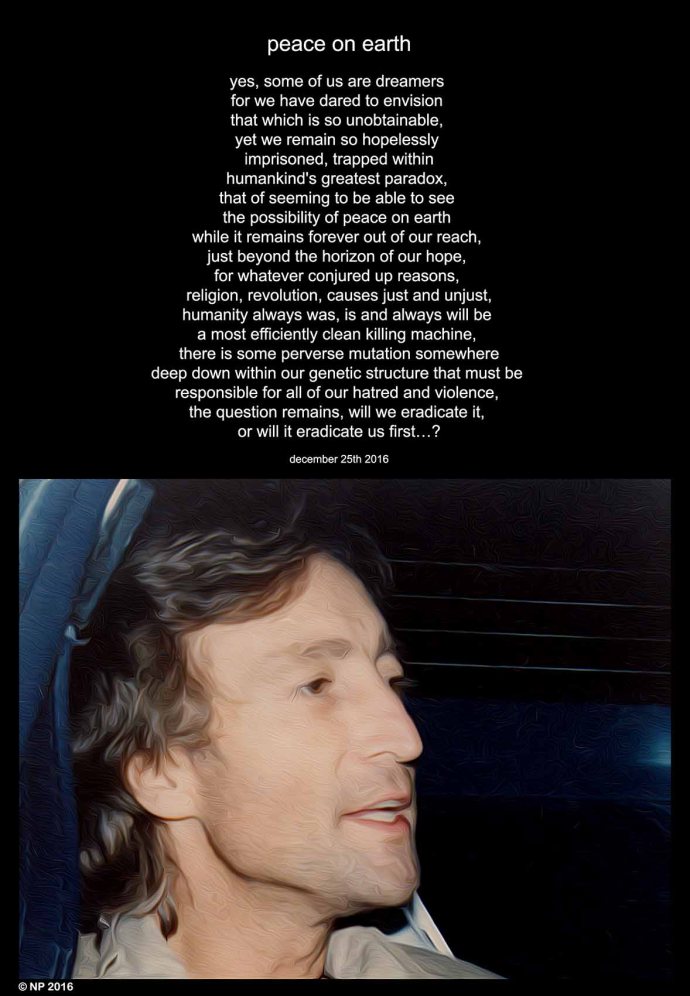 Digitally enhanced image created from a photo printed from an original negative and taken as Lennon sat in an automobile in front of The Dakota Building sometime in the mid to late 1970’s.

“One more stage, one more limo,

one more run for your life…”

Original scan of an early fan’s autograph book clipping (signed by all four Beatles) of a photo taken on December 15th 1962 and published in Mersey Beat in January 1963. The Beatles are at the Majestic Ballroom in Birkenhead as Bill Harry presents them with The Mersey Beat Poll Winner’s Award. The photo was taken by Graham Spencer, © Bill Harry. From my personal collection.

“Man will never be free until the last king is strangled

with the entrails of the last priest.”

Thirty four years ago today one of my generation’s greatest creative minds was brutally silenced by a madman. If one ever needs an example of life not being fair, then the assassination of John Lennon epitomizes the consequences of a life taken for no reason and the absurdity of a nation that places easy access to guns over the value of a human being. This American obsession with guns is simply obscene. And, pathetically, in the ensuing thirty four years we have learned nothing. In March of last year, along with a photograph of John’s bloodied glasses, Yoko Ono tweeted a sad and disturbing fact.”Over 1,057,000 people have been killed by guns in the USA since John Lennon was shot and killed on 8 Dec 1980.” And now, almost a year later, that number has grown even larger. And America? America doesn’t care. Americans don’t give a damn. Their right to possess weapons trumps ALL concerns about the safety of its citizens, of its children, of its loved ones, of the millions of innocent lives sacrificed to gun violence. I repeat, it is OBSCENE. A morally conscious nation would rise up and eliminate the obscenity. But, as recent events have made all the more clear, America is morally and judicially corrupt; too many Americans simply don’t give a damn. If more did care there could be hope for change, but power and greed in the hands of the few ensure that the many will continue to be slaughtered. Not even the cold blooded murder of defenseless school children has led to a reassessment of gun laws. America is a diseased, violent society that lacks compassion and the simplest moral comprehension of what is right and what is wrong. Criticize me all you want for saying it, but I am ashamed to be an American in this year 2014. I find little, if anything, to be proud of.

I originally posted this poem here on the blog on January 30th 2014. It was the most viewed of all my blogs to date, attracting 164 visitors and 211 views. That took me by surprise. At that time, as a new blogger with a meager number of followers, I hadn’t reckoned with that kind of response. I wrote the poem in 1984 in contemplation of the tragedy of Lennon’s assassination four years earlier. It’s not a very good poem, just a simple statement that addresses a profound point of view. I wish that I had never had a reason to write it, but then that is the same kind of wishful thinking that Lennon so brilliantly expressed in his song Imagine. We can dream, but realistically, we are not going to have peace and not going to eliminate violence in our world. Not anytime soon. Certainly not in our lifetimes, and perhaps not ever. That realization is also obscene.

In re-posting the poem this time I have added a photo of John Lennon signing autographs in New York sometime in the 1970’s. It is an actual original photo. I bought it, along with eight others in the early 1990’s from a collector of Beatles memorabilia. Unfortunately I do not know whom to credit the photo to as there was no information written on the back. I do believe though that there is a good chance that it has never been published and that perhaps you are seeing it here for the first time, but then I might be wrong about that. At any rate I have never seen it published anywhere. So, I retreat into my European evening here now, sadly remembering where I was and how I felt when I first heard the tragic news on that very black day in December 1980. The world was robbed of a great talent and life once again revealed its intrinsic unfairness. The good all too often die young and for no good reason. Rest in peace Johnny, we hardly knew ya…

Photo taken in New York City sometime in the 1970’s by an unknown photographer.