“Walking is also an ambulation of mind.” 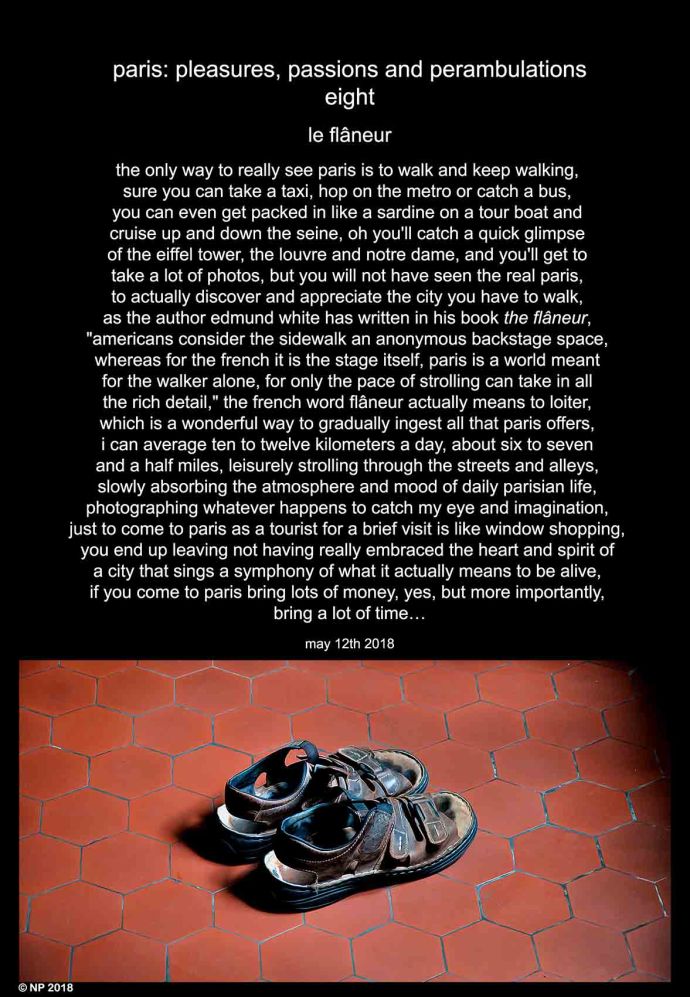 Digitally enhanced image created from an original photo of my time-worn sandals taken in Paris in May 2018.

“It is forbidden to forbid.” 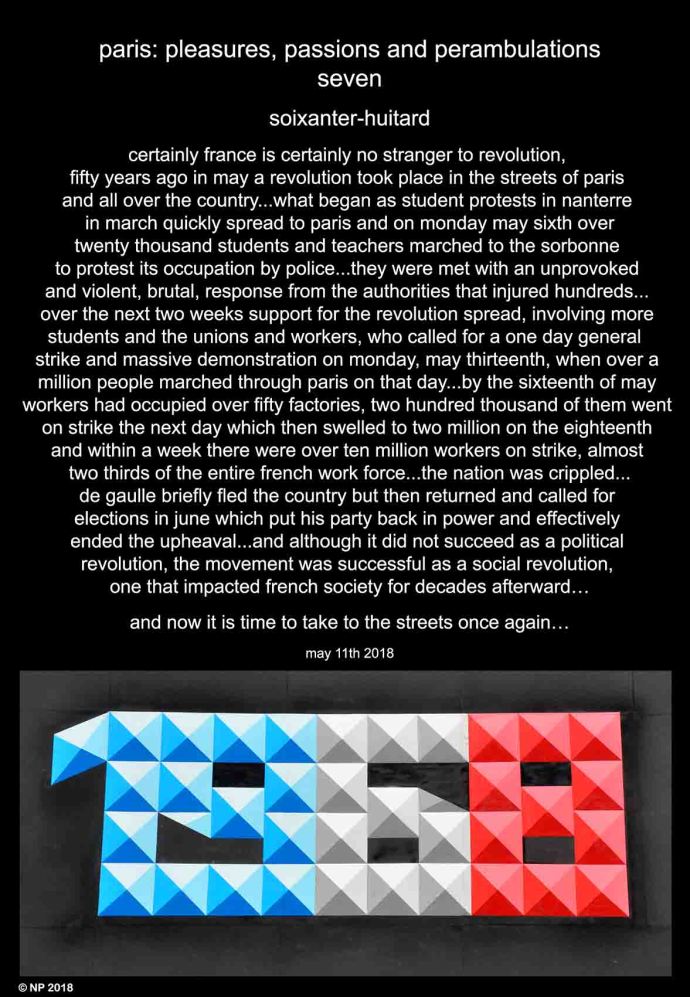 Digitally enhanced image “1968” created from an original photo of street art taken in Paris in May 2018.

“Creativity can be described as letting go of certainties.” 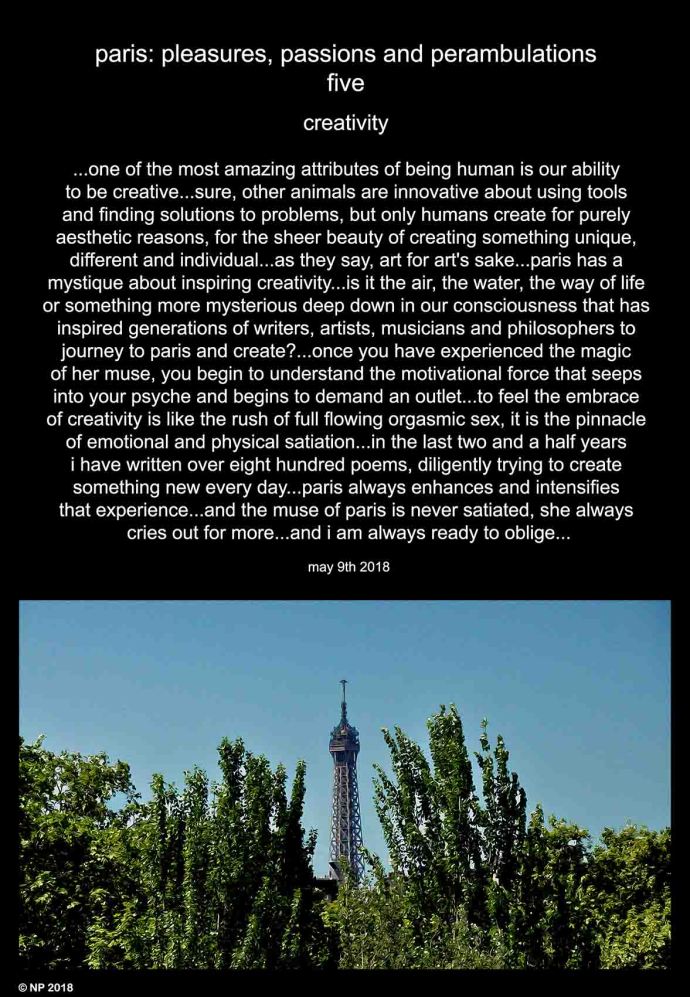 Digitally enhanced image created from an original photo taken in Paris in May 2018.

“Paris is always a good idea.” 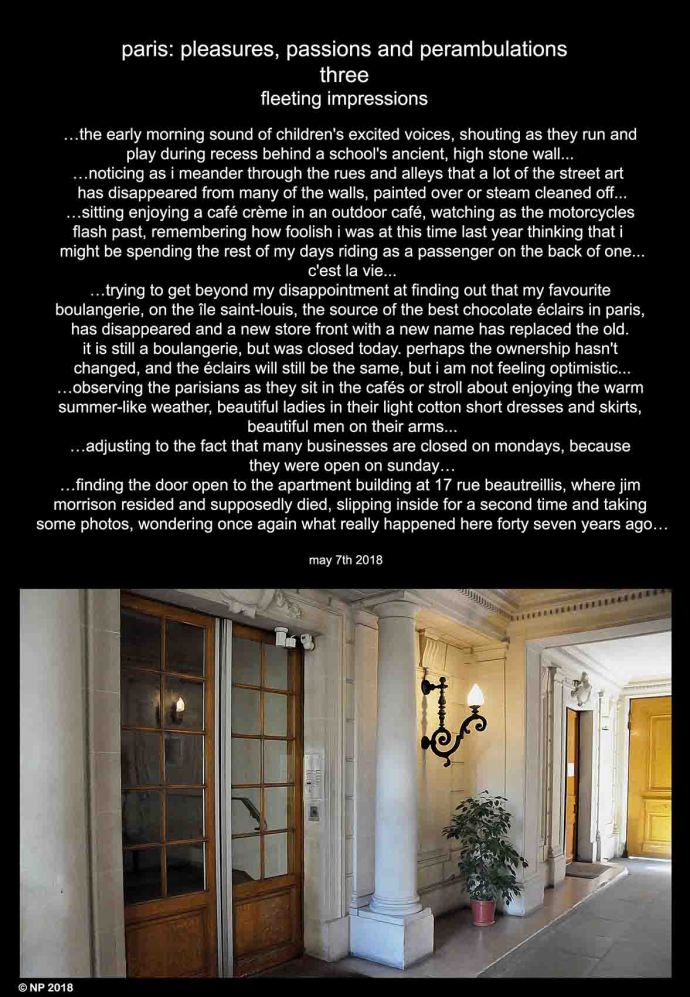 Digitally enhanced image created from an original photo of the inside of the entrance to Jim Morrison’s apartment building at 17 Rue Beautreillis taken in Paris in May 2018. The door to the stairwell is on the left, the street entrance to the right.

This is the third installment in a continuing series of excerpts 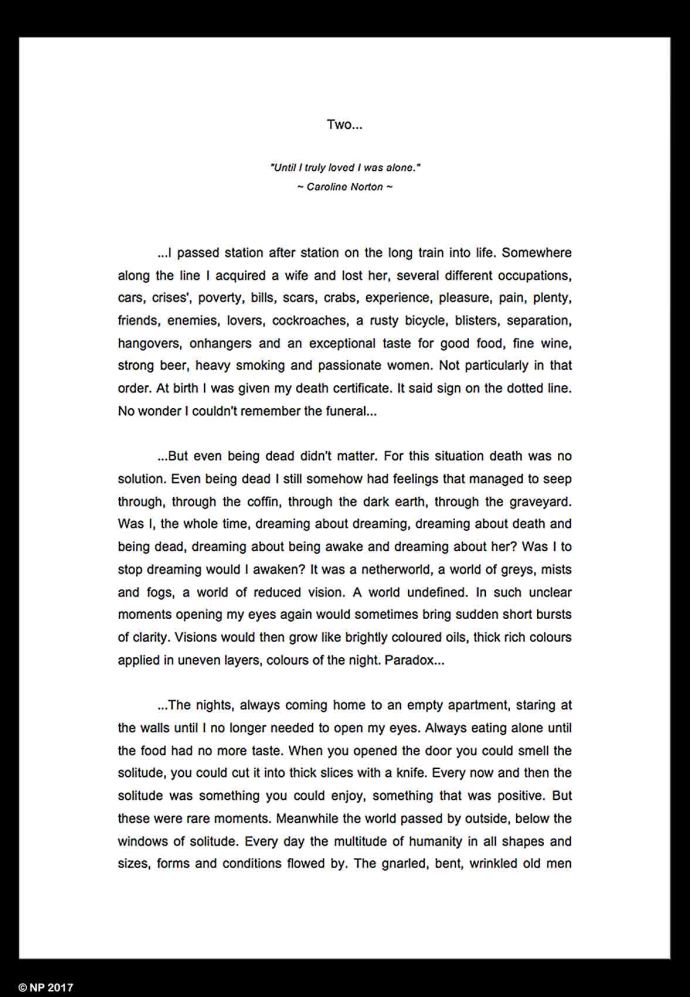 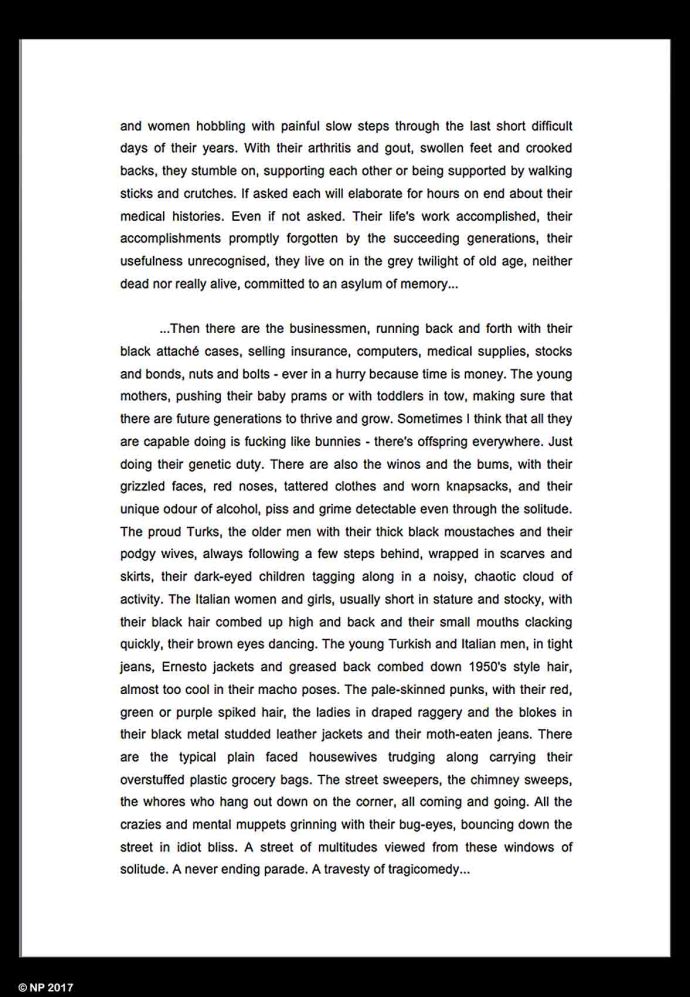 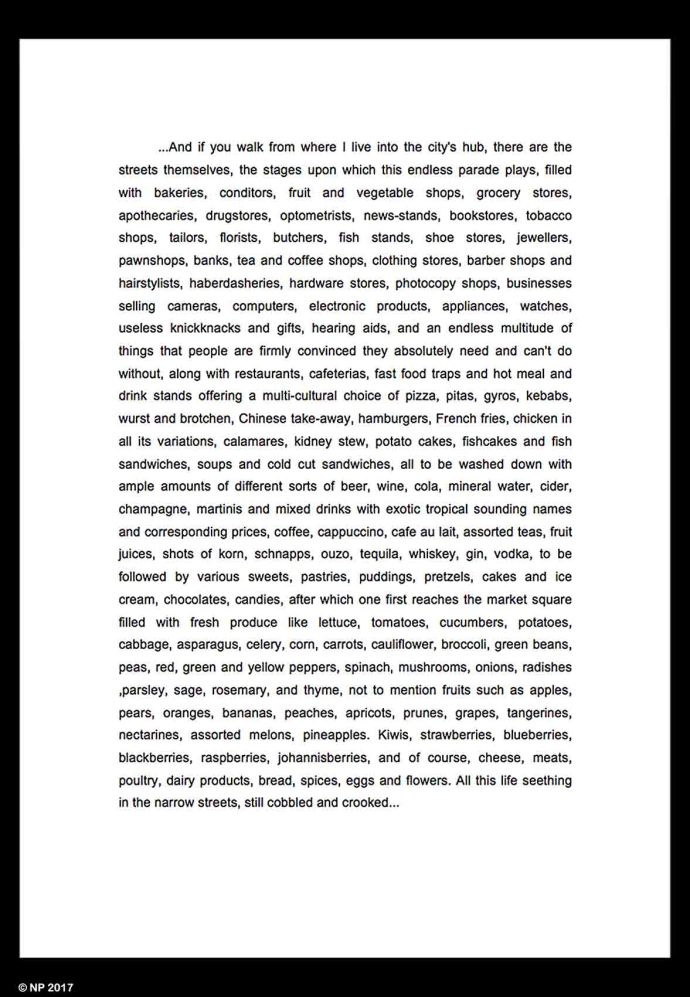 This is the second installment in a continuing series of excerpts 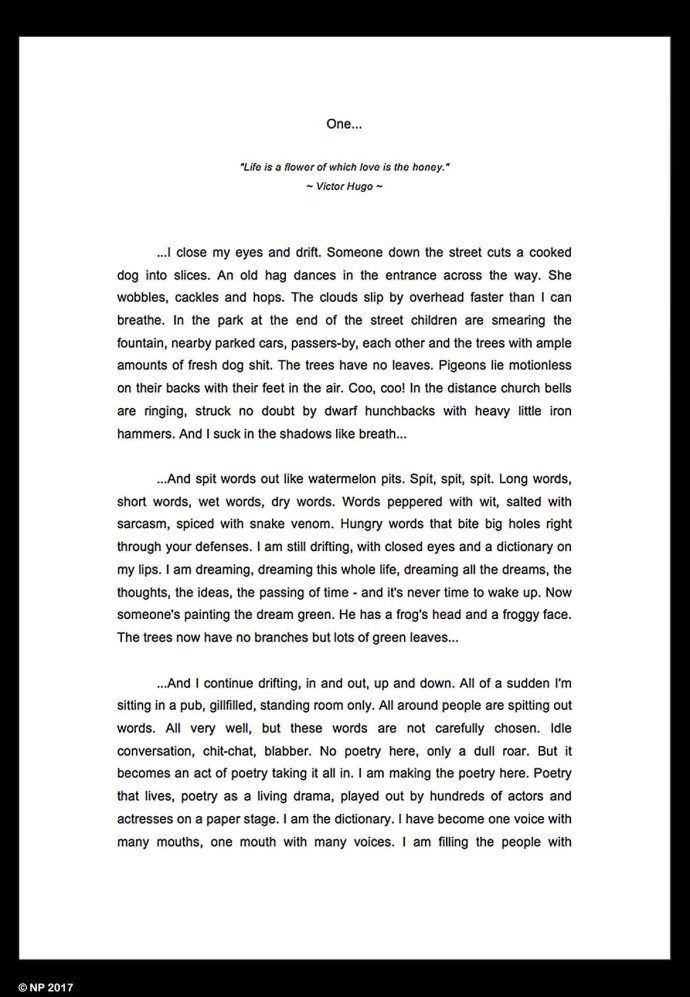 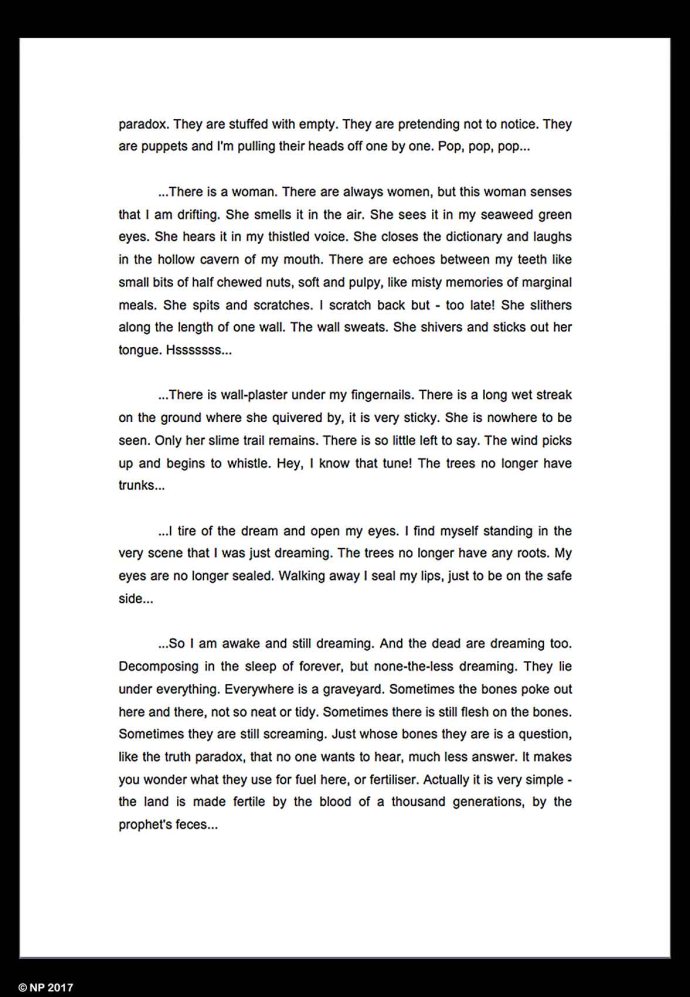 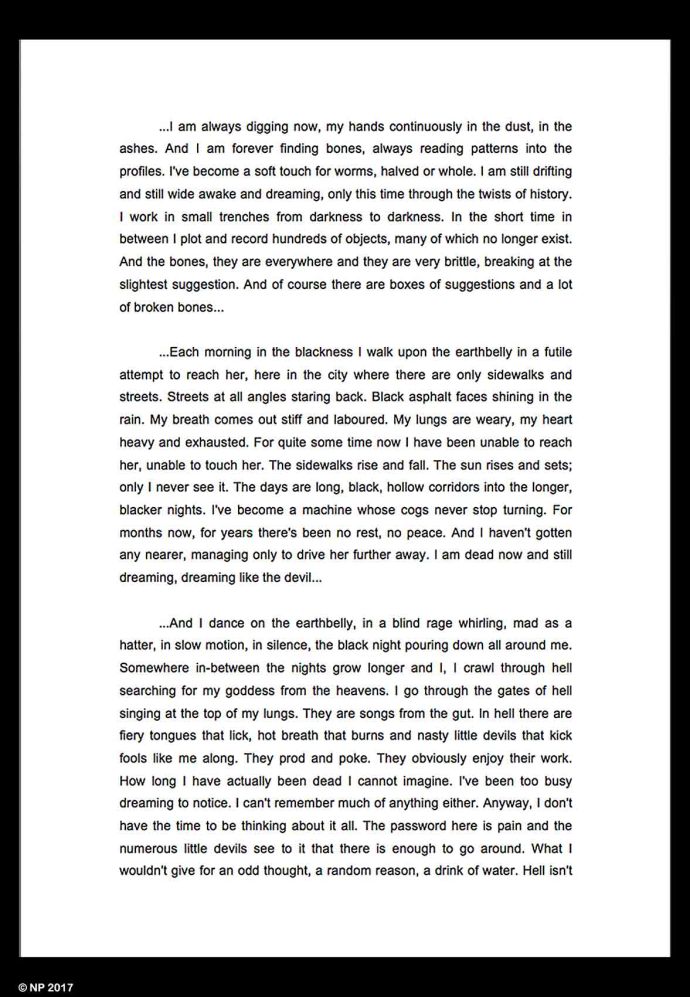 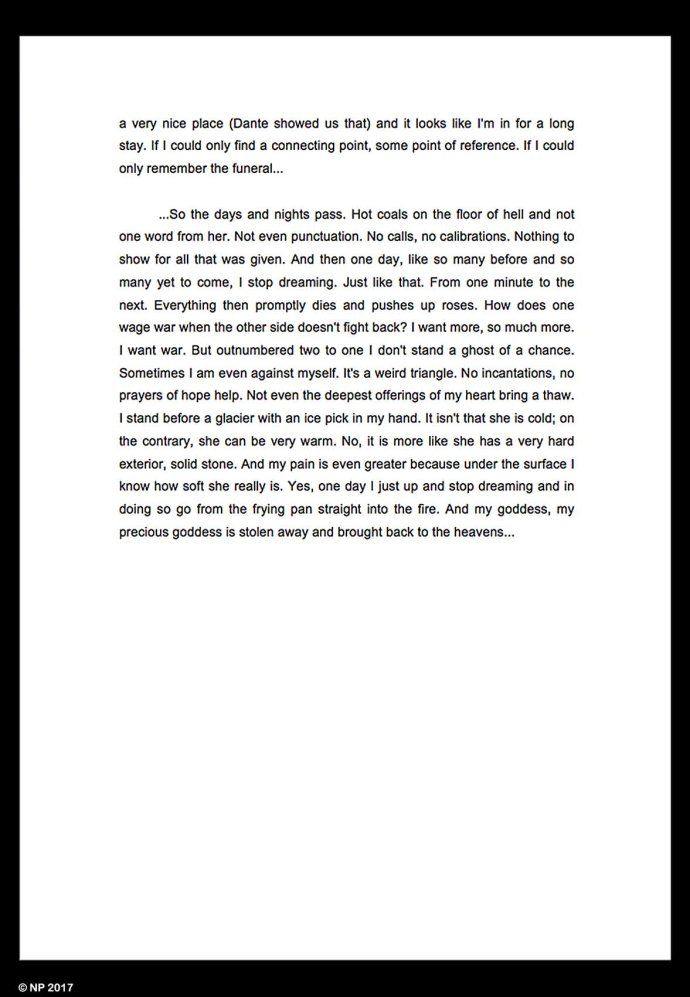 This is the first installment in a continuing series of excerpts 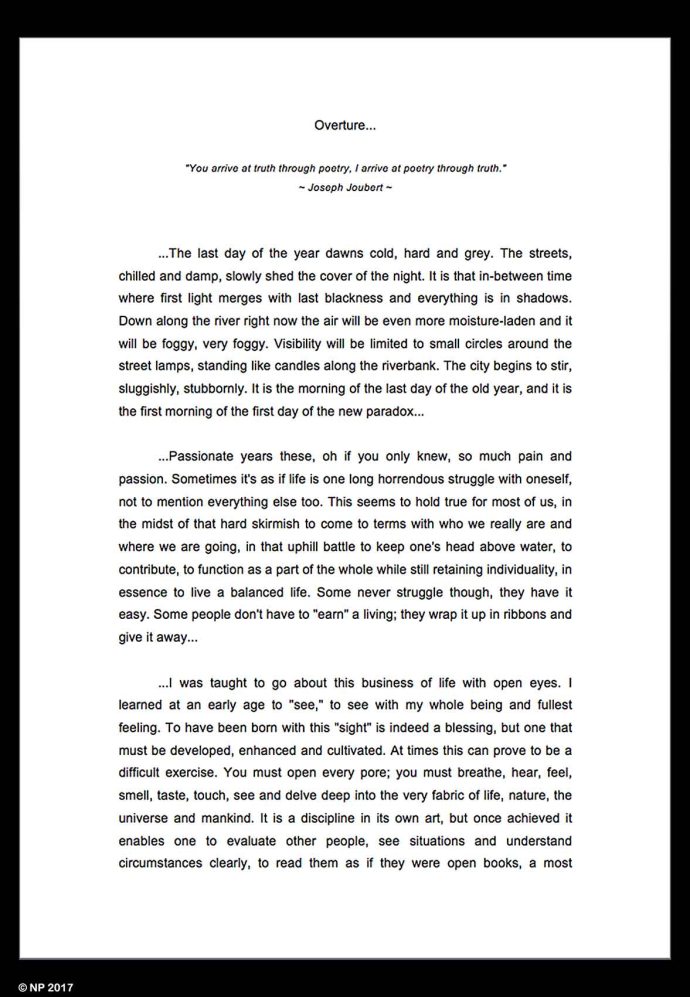 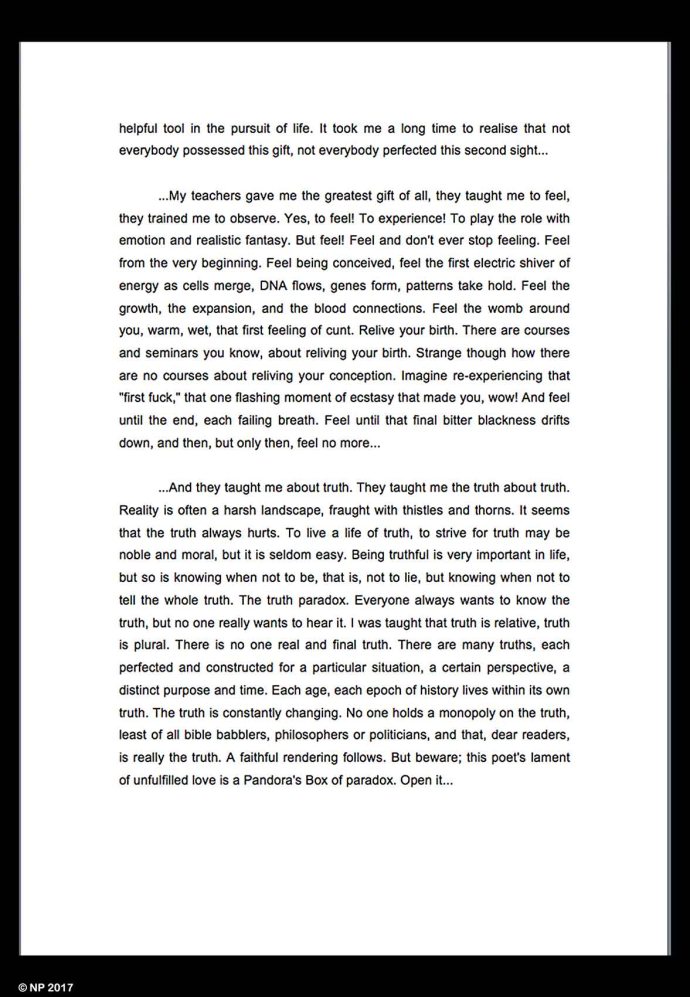 THE OLD MAN IN THE TABERNA

Yesterday I wrote about grayness. Today, an excerpt with sunlight, from a work in progress…

The Old Man In The Taberna

It was August. I lay stretched out on the beach soaking up the sun. I’d been lying there for most of a month, living on the beach with a sleeping bag and a small tent, staying as drunk and as stoned as possible and balling a German girl I’d met on the beach. At the taberna up in the dunes behind me I could hear a donkey braying, probably the one that the grizzled old drunkard’s wife would bring at the end of the afternoon or evening to drape him over and drag him home.

One evening I was sitting with the German girl in the taberna, plying her with ouzo to get her in the proper mood for a long night of lovemaking on the beach when the unshaven old man stumbled onto the tavern’s veranda, sat down at our table and ordered ouzo. He spoke no English or German, but indicated that he wanted to know where we were from. When the girl said Deutschland a real mean and nasty look filled his face. “Germania?” he said in a hoarse voice, “Germania!” He looked at her intensely with his dark eyes growing sharp and deep and repeated, “Germania?” He then took his wrinkled finger and dragged it in a swift movement across his throat. A look of shock coloured her face. Obviously he sill had memories of the war, when the Nazis had committed numerous atrocities during their occupation of Greece. He continued to scowl at her and slid his hand across his throat again. Then he turned his attention to me, waiting for a reply. When I told him that I was from America, the old man’s face lit up and he became animated. “America! America!’ he exclaimed, enthusiastically shaking my hand and kissing me repeatedly on the cheek. I can still feel the stubble on his face and smell his cigarette breath. He even got up a few times and staggered around to slap me on the back. “America, America,” he kept repeating and then started ordering one ouzo after another for me, while every now and then giving her a dirty look, another throat slitting sign and grumbling, “Germania.”

After one too many ouzos he finally nodded off, just as his wife showed up with the donkey. I helped her drape him over it and they waddled off into the night. The girl and I finished our last ouzos and stumbled down through the dunes, first to smoke some hashish and then spend a rather blurry night balling in the sand under a clear black sky filled with millions of stars. I left the island not too long after that and never saw the German girl again. Over the decades since then I have often wondered if, on one of those nebulous nights on that beautiful Grecian beach under all those twinkling eyes of the universe, I didn’t somehow plant a seed. I suppose I’ll never know. Ah, but then, I might be forgiven my youthful impudence, after all, it was the 70’s, when we were young, loose, carefree, foolish and, above all, so very much alive… 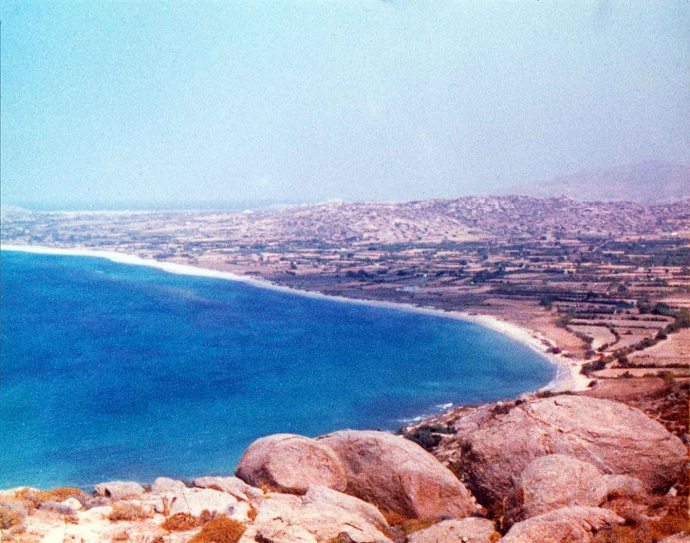 A view of the beach on the island of Naxos, seen from up in the mountain range that ran along the shoreline. Photo taken with a 110 format pocket camera in August 1979.

…life and love are at once strange and beautiful…

Special thanks to Ellen for the original idea… 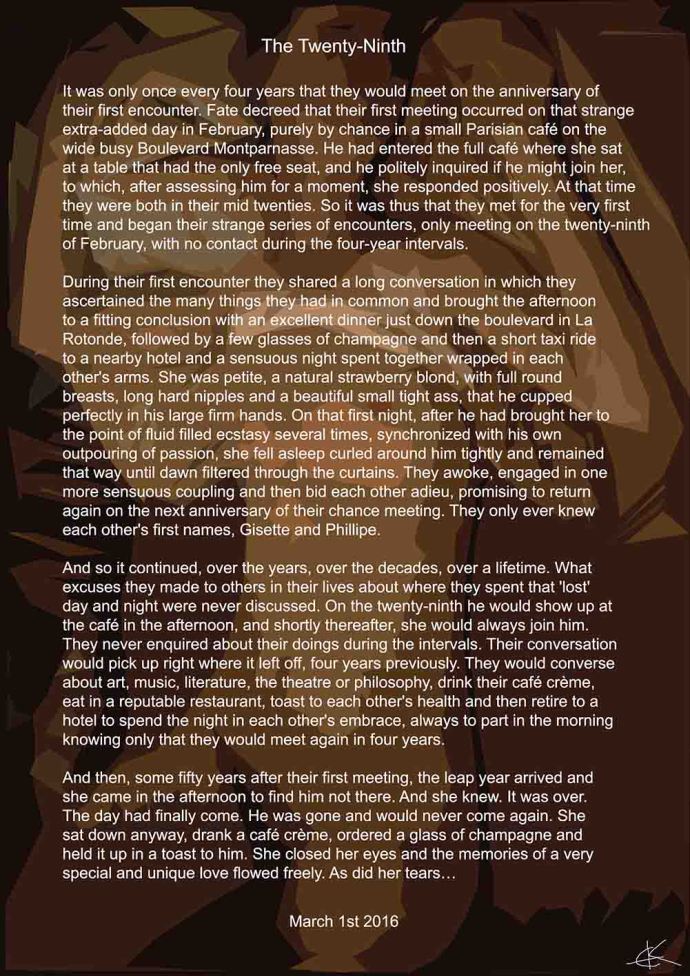 …somewhere in a dark corner of an overflowing brain, this memory still exists… 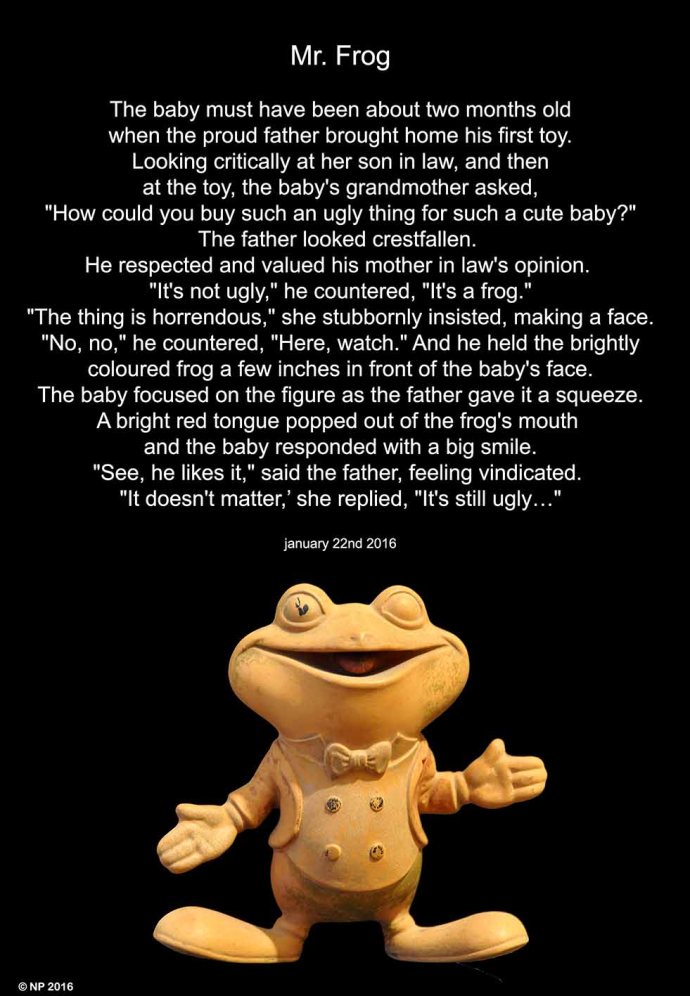 Mr. Frog, his paint almost completely faded, his body cracked in spots and the air valve in his back long lost, will be celebrating his 66th birthday this year. And, properly held, he can still stick out his tongue. Photo taken in January 2016.